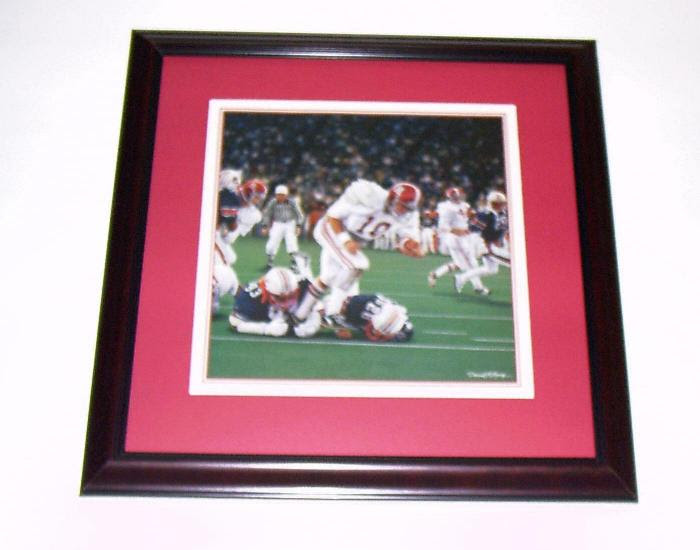 Daniel Moore is a blessing for frustrated bloggers trying to find images of an old-school SEC quarterback.

[Ed. - This post originally referenced Stan White until a commenter pointed out that my Google Image search for Stan White had produced a picture of Pat Sullivan. Since Pat is too prominent and does not allow me to show off, we audibled to a picture of Steadman Shealy. So there.]

Since one of the themes of the year in this end of the blogosphere is ESPN whoring themselves to the Big Ten and ignoring the SEC (a subject that I can comfortably address nine years after the State of Tennessee nearly got all Operation Barbarossa on Bristol, Connecticut), it bears mentioning that the job description for color analyst for a college football game is apparently "played quarterback in the Midwest." Leaving aside the fact that Gameday's roles go to an Ohio State quarterback, a Michigan wide receiver, and an Indiana head coach (OK, Corso spent some time at Florida State and Louisville, as well) and the Scoreboard show's roles go to a Pitt lineman and a Notre Dame head coach (if there's any doubt as to Holtz's loyalty, look at his garb on the cover of his hokey autobiography/self-help manual...or read about what he says about South Carolina inside), here's the list of color analysts for the major networks:

CBS (the network that covers the SEC exclusively):

(Note that all of the #1 analysts are former Big Ten players, assuming that we grandfather in Blackledge.)

Mr. Hollingsworth would have felt better if he had a zero-accountability job in front of the camera ahead in his future.

When SEC fans get chippy about the college football media being against them, this might be a reason why. OK, that and the fact that Gameday is apparently going to follow Ohio State around like the Dead, selling rancid patchouli and tie-dyed sweater vests festooned with psychadelic nuts along the way. ABC/ESPN electing to draft analysts from the conferences they cover is one thing, but why can't CBS find someone who, I don't know, actually played in the SEC to analyze SEC games? I actually like Gary Danielson a lot, but it would be nice if some network somewhere hired someone with a Southern accent. Maybe I'm just prickly about this after Keith Jackson's retirement and Ron Franklin's ludicrous demotion. Maybe the EEOC should look into whether Southern-ness should be a protected nationality. (Yes, I have actually researched this question and the answer is "no.") I won't trust a person if he doesn't want to see the KerwinBellstache on location in Iowa City this weekend.
Posted by Michael at 11:15 PM

Good post, never thought about the total midwestern domination in broadcasting - other than my rabid hatred Herbdouche.

FYI - I'm about 90% sure that is Pat Sullivan not Stan White.

Doesn't it seem like more SEC players get into coaching?

I coached Stedman Shealy's grandson (we call him Booger) in select soccer about 10 years ago....good athlete....went on to kick for the school that Bama's Prothro went to.

"the fact that Gameday is apparently going to follow Ohio State around like the Dead, selling rancid patchouli and tie-dyed sweater vests festooned with psychadelic nuts along the way."

I just spit on my monitor, thanks.