So That's How it is in their Family 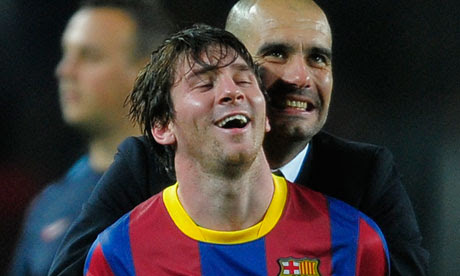 Apologies to Edward Rooney for the title.

I was not expecting an offensive performance from Real Madrid on Tuesday for a number of reasons. First and foremost, I remember well Chelsea's timid performance at the Nou Camp in 2006 after a Mourinho side had lost the first leg at home. Just like this tie, Mourinho's team needed a two-goal win on the road. Just like this tie, Mourinho's team never played more than one striker on the pitch, despite a wealth of attacking options on a very expensive bench. Mourinho has successfully beaten down expectations for the attacking intent of his teams against Barcelona so much that when Real appeared in a 4-2-3-1 (not exactly the most offensive formation in modern football, although as Jonathan Wilson will point out, the instructions to the players matter more than the number of ostensible attackers in the formation) and didn't camp out entirely in their own half, they were rewarded with plaudits from the announcers for a more positive approach. Yes, and OJ graduating from double murder to armed robbery was an improvement, but that doesn't make him a good guy.

That positive approach resulted in a whopping one shot on goal and only four attempts in the direction of Victor Valdes's net. When you need a two-goal win and you don't force the opposing keeper into a single save, then you don't get the blame the refs. When you need two (and then three) goals and you never play more than one striker and three attacking midfielders (just as in 2006, both of Real's subs were like-for-like: a striker for a striker and an attacking midfielder for an attacking midfielder) and you never change from having a four-man backline screened by two defensive midfielders, then you are, um, there's a euphemism for a cat that comes to mind, Jose.

Mourinho does deserve credit for one accomplishment. His ravings about the UEFA/Unicef conspiracy to knock his much-beloved teams out of Europe clearly had an effect on Frank de Bleeckere. De Bleeckere had no fewer than three obvious opportunities to give Ricardo Carvalho an early shower. Carvalho got a deserved yellow card on 13 minutes and then proceeded to commit a number of similar (if not worse) offenses on Leo Messi throughout the half. Not wanting to listen to more kvetching about playing with ten men, de Bleeckere looked the other way. Yes, he gave Barca a pair of calls to snuff out two of Real's rare attacks, but at best, those were make-up calls. I'm sure that Mourinho will see it in exactly the same way when he talks to the media this week.

So Barca progresses to a Champions League Final at Wembley, the site of the Blaugrana's first European Cup win, against Manchester United, the victim for the Blaugrana's last. I'll have a lot more to say about this game as it gets closer, but my initial thought is that Alex Ferguson has an interesting tactical choice to make. The way to play Barcelona is to stifle the midfield. One midfielder needs to be ready to deal with Leo Messi's floating movement back into the midfield. Watch Leo Messi's movement on the goal on Tuesday night:

The defensive responsibility for the goal falls primarily on Marcelo for not tracking Pedro's run, but that run came through the area vacated by Carvalho. Carvalho was originally out of position from trying to stop Dani Alves's run, but watch as he takes a step or two towards Messi instead of occupying the zone through which Pedro runs. The danger that Messi's work as a false nine presents is that he can pull central defenders out of position, creating the space for the wingers - Pedro and David Villa - and the offensive midfielder - Xavi and Iniesta - to make runs through the vacated space. United will need a midfiuelder to deal with this threat, as well as two midfielders to handle Xavi and Iniesta. This is the approach that Mourinho concocted and it worked at times. You aren't going to out-pass Barcelona, so you might as well try to negate them and then hit them on the counter. The problem with playing three midfielders with defensive responsibilities is then it does not leave room for the Rooney-Chicharito pairing at forward along with two wingers (unless Rooney gets defensive responsibility to harry Xavi or Iniesta). How does Ferguson resolve this question? He has three weeks and two days to mull it over.
Posted by Michael at 5:50 AM

Email ThisBlogThis!Share to TwitterShare to FacebookShare to Pinterest
Labels: Barca, The Other Football

The first-leg red to Pepe and disallowed goal in the second put me in mind of some gritty crime drama, where the noble detective, after reaching a number of dead ends in his effort to bring down the evil kingpin, has to strike a deal with some sleazy two-bit hustler to finish the job. They're maybe not the means you want, but when you're talking about denying Jose Mourinho another CL trophy at Barca's expense, the ends sure as f**k justify them all the same.