And he does it even when he's not appreciated, or respected, or even loved. He simply bears up and he does it. Because he's an owner of a local basketball team. 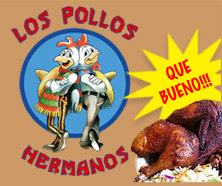 The Hawks have been purchased by Gus Fring! I can hardly contain my excitement! I've been in a major Breaking Bad phase this summer as Mrs. B&B and I have ploughed through the first three seasons and asked ourselves the same question that we asked last summer when we were catching up on Mad Men: what took us so long? I have been ruminating on an "SEC Coaches as Breaking Bad characters" post (Gus is obviously Nick Saban, Bobby Petrino is Tortuga, Les Miles is Tuco, Houston Nutt is Saul Goodman, Mark Richt is Walter White [with 2007 Evil Richt as Heisenberg], etc.), but now, Atlanta Spirit has saved me the trouble by selling the team to a Latino restauranteur.* If only Alex Meruelo were from Chile instead of Cuba. Josh Smith might want to keep an eye out for boxcutters in the dressing room if he keep hoisting up 21-footers early in the shot clock.

* - Because a sample size of one tells me that people from Southern California can be prickly about analogies made for rhetorical or humorous purposes, let me make clear that I am not accusing Meruelo of being a psychopath like Gus Fring, nor am I making the claim that his other business interests include an industrial cleaning facility with a meth lab in the basement. I heard Pizza Loca and immediately thought of Pollos Hermanos.

As far as my actual opinion of the purchase, it sounds good. Anything is better than the irretrievably broken Atlanta Spirit. The Hawks might get some local goodwill as a result of a new ownership face. They can certainly use the boost after a disappointing year at the box office. I have little time for the idea that team ownbership requires one face. The Braves' solid performances over the past two years on mid-level payrolls illustrates that corporate ownership can be just fine. Conversely, the people who claim that they wish that the Braves had an Arthur Blank-style face of the franchise might consider that Jerry Jones and Dan Snyder are also the faces of their franchises. That said, Atlanta Spirit was a disaster, so Meruelo is a welcome addition. As long as he has the money to run the team without cutting corners, then I'm happy. The story that he started with one pizza restaurant when he was 21 and turned it into a business empire speaks well to his acumen.

Hopefully, that acumen has identified the Hawks as a neglected asset. For most of its history, the franchise has struggled to convert its place as Black Hollywood's home team into butts in the seats. Atlanta remains a good basketball town and a very good NBA market without being crazy about the Hawks. The roster is fairly good, outside of the colossal disaster that is Joe Johnson's contract. If Jeff Teague's playoff burst is not ephemeral, then the Hawks have a good starting lineup, a notch below Miami and Chicago, but not too shabby. The team lacked depth last year, which is a problem that an emotionally invested owner with a checkbook can remedy. Also, if a new labor deal has retroactive effect to erase (or at least ameliorate) insane agreements like the Johnson deal, then Meruelo will be in great shape. Mike's services will not be required.
Posted by Michael at 6:21 PM

I have been doing the same with Breaking Bad this past month and am now just finishing Season 3. Am currently DVRing Season 4 to watch next.

Sorry but I still will not watch NBA basketball.