Not a Good Period for Michigan Icons 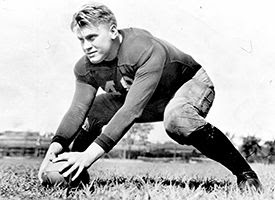 Our only unelected president, the one who originated the phrase "our long national nightmare is over" that I use every time one of my teams ends a losing streak, is no longer with us. Despite being parodied as a purveyor of malapropisms (that's one expensive education rolled into one tidy sentence), Ford was a pretty good turner of a phrase. Unfortunately, something tells me that this quote following the Vietnam War is going to take on new meaning in a few years:

"Today, America can regain the sense of pride that existed before Vietnam. But it cannot be achieved by refighting a war that is finished as far as America is concerned."

And this op-ed from 1999 in support of Michigan's affirmative action admissions policies is one of the better defenses of the program I've read. The argument that the country would have been better off in terms of race relations if its leaders in the 40s, 50s, and 60s had attended better-integrated colleges and universities is a sharp one. But what am I talking about? Prejudice is a thing of the past...

Youth is warcraft leveling not a time of life;warcraft leveling it is a wow lvl state of mind; wow power level it is not power leveling amatter of World of warcraft Power Leveling rosy cheeks, red wrath of the lich king power leveling lips and supple knees;WOTLK Power Leveling it is a matter of thewill,wlk Power Leveling a quality of buy aoc gold the imagination,aoc gold a vigor of the emotions; it is thefreshness of the deep springs wow gold of life. Youth means a tempera-mental maplestory mesos predominance of courage over timidity, of the appetite formaple story mesos adventure over the love of ease. wow gold This often existsin a man of 60 more than a boy of 20. Nobody grows old merely by anumber of years.