What does a coach do when his program hasn't won a thing in 17 years and his conference hasn't won a BCS bowl in eight seasons? Naturally, you talk s*** about the achievements of other programs in the league:

"Not long ago, it was Florida State and Miami dominating college football. Where was the SEC then?" said Clemson coach Tommy Bowden. "These things go in cycles. The SEC has had a nice run. I'm sure that the ACC or another conference will take its place."

Yes, where was the SEC back when Miami and Florida State were so good in the 90s? 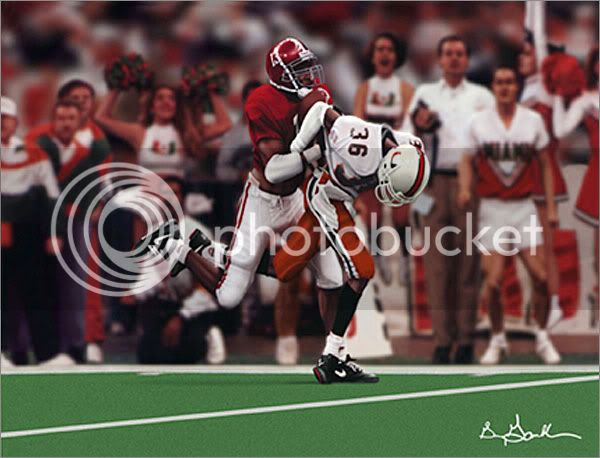 Honestly, will writers reprint absolutely anything a coach says without comment?
Posted by Michael at 8:59 AM

I wish writers would reproduce anything I say without comment. You'd here some crazy stuff then, I tell you.

I think you should repaire those photos (right side).

From the beginning to the end of Miami era 1983-2001, which is roughly the same period as the FSU era, the SEC won 3 National Championships.

And if your counterpoint is simply that the Big 8/12 was a lot weaker as a whole and therefore could produce a lot more undefeated teams at the top, may I ask how come you didn't post a picture of Tommie Frazier running for 800 yards against Florida? Think that could happen today?

We're now in a period of total SEC supremacy, which wasn't the case 10 years ago or 20 years ago. Sounds like things go in cycles...

Ed, it's nice to hear from you. And I didn't even have to make a Charlie Weis/Hai Fat comparison to bring you out.

1. Why are you bringing the Big 8/12 into the picture? Bowden was making a comparison between the SEC and Miami/FSU. The SEC beat Miami/FSU all three times that the two conferences met one another in the 90s in national title games. Seems like a relevant point, no?

2. In defending the SEC, I'd draw a distinction between the period before 1990 and the period after. Prior to 1990, the SEC went through a slight down period between Bryant's retirement and Spurrier's hiring. Once the league modernized in response to Spurrier dominating the conference, it regularly produced teams on the level of Miami and FSU. Moreover, it was producing teams that faced more challenging schedules than Miami and FSU were playing.

I suppose you could call this a "cycle," but a cycle implies that every conference gets its turn on top and that's not the case. SEC teams have better proximate talent bases, fan interest, and resources. (Look at the money that Arkansas is willing to pay a coach as opposed to, say, Purdue, the Big Ten equivalent.) As long as they are properly run, they'll always have an advantage, so calling conference strength "cyclical" is a misnomer. Evolution is not a cycle; it's a process that moves in a certain direction. SEC football has evolved since 1990 (with certain hiccups along the way).

Michael, there’s a trend here. I come to the defense of bad coaches.

1) If you’re talking about how the SEC currently dominates college football and how that was not the case 10-20 years ago, it seems relevant to bring up the Big 8/12 and its multiple national championships, because it shows just how not dominating the SEC used to be.

It’s nit-picky, I suppose, given that I think the SEC was a good conference during that period, but I would have to disagree that 3-0 in NC championships proves the following.

“Once the league modernized in response to Spurrier dominating the conference, it regularly produced teams on the level of Miami and FSU.”

Florida was the SEC’s top dog during the 90s followed How did Spurrier fare against FSU and Miami overall? Alabama and Tennessee split duty as the no. 2 in the conference during that time. ’92 and ’98 excepted, do you think Stallings and Fulmer “regularly produced” teams on the level of Miami and FSU?

2) An evolution is not a cycle only if everything remains stagnant around it. Usually though the lizard that develops the sticky tongue in order to catch the bug will find that its prey has developed a poisonous coating after a few million years.

The SEC has great talent, great fans and great resources – and yes it’s evolved. It’s currently the lizard with the sticky tongue. The remaining college football conferences, particularly the ACC which has the schools capable of recruiting the same kind of talent, are the helpless bugs. The evolution they must make, and I think are starting to make, is to fully digest the SEC model and become as cutthroat in terms of going after the very best coaches. Didn’t we saw the beginning of that with Michigan going outside of its family tree?

So again I think Bowden is right about cycles. The irony is that for there to be another cycle, it will involve getting rid of terrible coaches like him.

You know what dwarfs them all? Russell's Celtrics + the Spartans at Thermopylae. Nobody can touch that shit.

Are there any other absurd non-related group combinations you'd like to introduce into the conversation?

Also, the SEC was dominating football 10 and 15 years ago. It didn't sit comfortable and unchallenged on the top of the heap then, and neither does it now. Your 10-20 year window as dating back to a time when the SEC wasn't dominating is misplaced.

Miami wasn't consistently dominant in the 90s (FSU, otoh, was). SO I'm not sure why somehow think Miami makes your point regarding SEC not being dominant at all, while Alabama and UT not being as consistently good as Florida somehow does.

Now that you mention it, I’m perfectly convinced that the SEC was dominating football 10-15 years. In fact I remember feeling really sorry for Nebraska whenever they played SEC teams in the 90s in major bowl games – particularly national championship games – in the way that I pity Big Ten teams now.

And I’m not sure what prompted me to bring up Big 12 teams, FSU or Miami, much less together in the same sentence. I know it’s absolutely forbidden that, when discussing the “dominance” of one body, unit or entity, one would compare it to other similar bodies, units or entities against which it competes. It’s through that logic that I’ve been able to convince myself that the Republic of Ghana currently dominates international trade.

And that the Spartan dominated Thermopylae. Nice whiff on the ancient history, old boy.

Tennessee produced some very good teams throughout the 90s. The '95-'97 teams were all very good with that Manning guy under center. The Heath Shuler teams in the early 90s were also pretty good. As for Alabama, I'd agree with you as they didn't really hit the heights after the 13-1 team from 1994. For the first half of the decade, they were excellent.

As for Spurrier against FSU, he did OK, but not great. However, those games were never especially fair. Florida would play FSU the week before the SEC title game. FSU had 1-2 big games all year and could devote far more attention to Florida. Generally speaking, it's hard to say how Miami and HSU would have done against quality competition, week after week. They were not presented with that challenge.

I think we can probably agree that conference strength tends to wax and wane, but the SEC has advantages that make their waxes higher and their wanes less pronounced. It's hard for other conferences to compete on the SEC model because they don't have the fan interest and resources to do so. Michigan does have that ability, hence the RR hire.

My father was very like to play the Aion, but he do not know how to buy the aion gold, so I know a website sell the cheap aion gold, in here I can buy aion gold. It is easy.

Tommy Bowden is so great!