If I were Bob Bradley

I like to think that I know something about the way that Spain play after having watch Barcelona upwards of 40 times this season. This might not be entirely accurate because there are going to be only two to four Barca players in the Spain side today. Xavi and Puyol are certain starters; Busquets and Pique are possibilities, although unlikely because Xabi Alonso will likely fill the defensive midfield role and Albiol will partner Puyol in central defense. Ideologically, there would also be criticism of conflating Spain and Barcelona: 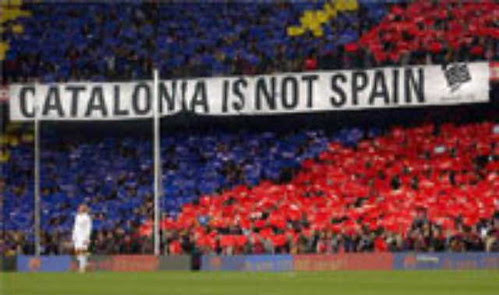 With those caveats out of the way, the Spain and Barca play very similar styles, built around short passing and quick movement. (The Spanish term is tika-taka football.) Xavi is the fulcrum of both sides, spraying passes all over the place and allowing his team to monopolize the ball, thus protecting the defense. Both sides will press aggressively when they give the ball away so as to prevent the opponent from maintaining possession and running at the defense. Both sides have a rampaging right back who will generate offense down the right flank, but will also occasionally leave his team exposed defensively. Spain have more of an aerial threat through Fernando Torres, which makes them more likely to score on crosses; Barca are more of a threat to dribble through the defense through Messi and Iniesta.

The best blueprint for stopping the Barcelona/Spain style was demonstrated by Chelsea in the Champions League semifinal. If Guus Hiddink isn't going to coach the Nats, then we can at least learn from his game plan against the tika-taka style. Hiddink deployed three robust, physical defensive midfielders: Michael Ballack, Michael Essien, and John Obi Mikel. These three screened Chelsea's able back line and presented a big wall in front of Xavi and Iniesta, while also helping on the wings against Dani Alves, Messi, and Thierry Henry. Chelsea's midfield and defensive lines played close together to deny Barca the space to pass their way through.

The US doesn't have Chelsea's personnel, but Bob Bradley can mimic this approach:

1. Play two defensive midfielders. Ricardo Clark should be an automatic on the team sheet. The second option should probably be Jose Francisco Torres. This is not a game for Bradley to play his best 11. Long term, the future of this team is a Michael Bradley-Benny Feilhaber pairing in central midfield, but that pairing would get eaten alive by Xavi, Xabi Alonso, and Cesc Fabregas. Bradley should be playing in front of two defensive midfielders so he can be free to look for shooting chances at the head of the box, a la Frank Lampard or Steven Gerrard.

2. Keep the defensive and midfield lines close together. If Xavi gets space and time, this is what he will do:

Xavi had four assists in one game against Real Madrid, or two fewer than Cristiano Ronaldo had in the entire Premier League season. Real left space between its lines and was eaten alive. The Nats cannot play an expansive game where they leave players forward thinking about goals. All of the midfield will have to come back to help, both in the middle and on the flanks (especially the US left, where Jonathan Bornstein is going to be vulnerable. When the US gets the ball...

3. Get the ball to the left wing quickly. If the US is going to squeeze out a 1-0 result, the goal will need to come from a set piece (unlikely because we aren't going to have the ball that much and won't get many free kicks) or a quick counter catching Sergio Ramos forward. The one match up advantage that the US has is that it can put its best player - Landon Donovan - on the offensive left side to exploit a Spanish defensive weakness. When Spain relinquishes the ball, the American players will need to get the ball out quickly towards Donovan. Donovan can hopefully exploit space, make a run, and then find Jozy Altidore or Clint Dempsey (one of whom should be playing striker, not both) making a run into the box. I might lean towards playing Altidore in this game because his physical presence would allow the US to play a little low-risk longball.

I'll be very interested when I watch the game to see how Bob Bradley adapts his tactics to play against a superior opponent. He has to do better than he did against Brazil, when his horrendous team selection opened the US to be carved apart. He has to resist the urge to think that the US can play the same against Spain as we did against Egypt. The odds are against the Nats, but after beating 9,000 to one odds on Sunday (I significantly underestimated the odds in my last post), nothing's impossible.
Posted by Michael at 6:31 AM

Email ThisBlogThis!Share to TwitterShare to FacebookShare to Pinterest
Labels: America F*** Yeah, Barca, The Other Football