There Must be Some Way Out of Here, Said Thousands of Falcons Fans to the Thief 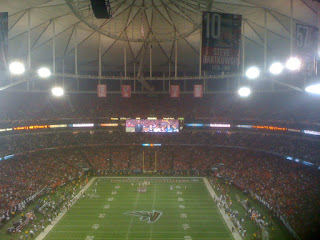 So it turns out that the Falcons just aren't that good. The 13-3 record masked the fact that the team just isn’t that good on offense or defense. The shortcomings were exposed brutally by the Packers last night. If anything, the game was another illustration of the fact that a team is often not as good or bad as its record. I have no idea how Green Bay lost six games in the regular season. Coaching malpractice is the only explanation that makes sense. Now that the Pack have a functional running back, they are a team with no weaknesses. The Falcons, on the other hand, have a raft of issues to address. In fact, the silver lining to a loss like that is that it will prevent Thomas Dimitroff and the rest of the Falcons’ brain trust from buying the notion that the team is elite and needs only minor tinkering. The Packers showed what an elite team looks like and the Dirty Birds are still about two drafts away from getting there. What needs to change?

Let’s start with Mike Mularkey. There is a general criticism to be made and then a specific one. Generally speaking, the Falcons’ offense is underwhelming because it does not threaten the opponent down the field. Can anyone remember an instance where the Falcons took a shot down the field last night, other than the hurried throw-and-hope by Matt Ryan for his first interception? (And nice effort on that play, Michael Jenkins.) The Packers knew that the Falcons were going to be throwing in a certain short area and they jumped all over those routes. Look at the difference between the cushions given to Packers receivers and those given to Falcons receivers. You think that the ability to stretch the field isn’t a factor there? That brings us to the specific criticism: the play that ended in the back-breaking pick six was one of the worst playcalls in recorded history. Let’s count the ways in which it was a terrible idea. Mularkey decided to roll his right-handed quarterback left to throw a sideline pattern when the defense knew that the Falcons had no timeouts and would need to throw to the sidelines. Not to belittle him, but Tramon Williams had an incredibly easy read. You know you’ve dialed up a bad play when your quarterback is asked about the play after the game and he says he should have thrown it away. No shit you should have thrown it away, Matt; your offensive coordinator might as well have presented Dom Capers with an engraved tablet telling him where the throw was going.

Athough the Falcons’ defense was as bad as the offense yesterday, Brian VanGorder does not deserve the same degree of criticism for two reasons. First, there was evidence of good defensive coaching yesterday in the fact that blitzes dialed up by VanGorder got unblocked blitzers into Rodgers’ face on numerous occasions. Those blitzers whiffed repeatedly, which is a clear an example of a failure in talent as opposed to scheme. The team had the same issue against the Saints. Those missed sacks were critical because they deprived the Falcons of the ability to get the Packers off the field. Second, the offense is supposed to be the strength of the team. It’s the offense that has the #3 pick under center, the first round left tackle, the pair of first round receivers, the coveted free agent running back, and the Hall of Fame tight end. The defense hasn’t received the same attention until the last two drafts and it had a longer way to go when Dimitroff and Smith came to power.

That brings us to the second area crying out for improvement: the pass rush. The defensive line is critical for Brian VanGorder’s defense because he isn’t a blitz-heavy coordinator. The defensive game plans in the second Saints and Packers games were out of character in the number of blitzes (a point that Ron Jaworski made quickly) and were probably based on a recognition by VanGorder that his defensive line isn’t good enough to get pressure on Brees and Rodgers without help. We assumed after last season that the Falcons would look to upgrade the defensive line – specifically the defensive end spot opposite John Abraham - after a season in which opponents had great success throwing the ball. Instead, Dimitroff took the opposite approach to the pass defense, signing Robinson, and then he didn’t draft a defensive end at all. Given the available options in the Draft, this made sense at the time, but now, it’s time to get an upgrade over Kroy Biermann, a player who should be the first defensive end off the bench. The Falcons were 22nd in the NFL in sacks this year. If you prefer advanced stats, the Falcons finished 23rd in Football Outsiders' adjusted sack rate.

Last night’s game drove this inadequacy home. Aaron Rodgers had beautiful pockets from which to throw. When he felt pressure, there was always somewhere to go. Ryan usually had guys in his face. For the Falcons to become elite, two things have to happen on the defensive line. One is that either Peria Jerry or Corey Peters need to turn into a pocket crusher to go with Jonathan Babineaux as a penetrator. The second is that the Falcons need to find a bookend for Abraham, either in the Draft or in free agency. VanGorder needs to find his Quentin Moses (or 2002 Sugar Bowl Will Thompson) to go opposite his David Pollack.

Even if 13-3 flattered the team, this was a very good season for the Falcons. Three straight winning seasons and two playoff berths out of three means that this team isn’t a flash in the pan like every other good Falcons team has been. The days of a topsy-turvy NFL are long gone. Smart teams have figured out how to manage the salary cap. With limited exceptions, the AFC is consistently dominated by the Colts, Patriots, Ravens, Steelers, and Chargers (with the Jets seeking to join the club). In the NFC, the Falcons seem to have joined (or are at least close to joining) the Giants, Eagles, Packers, and Saints as teams that can be expected to contend every year. The keys for the team going forward will be figuring out how to unleash their offensive weapons in more dangerous ways (Mularkey needs to stop thinking like he has the Steelers defense in his corner) and improving the pass rush. If that happens, then maybe Falcons fans will stick around for all four quarters of a playoff game.

I think Finley’s injury was the best thing to happen for this team because it forced the offense to learn how to manage a game, find a running a game, and support a really good defense. Really showed in the win at Philly.

Did you ever find out what how to say schadenfreude in Cajun French? The last time I saw such a backbreaking defeat: when my Saints collapsed against the Bears in the NFC Championship. It's hard to stick it out in a game like that, but my God did the Georgia Dome clear fast.

I feel bad for Ryan. He's a better quarterback than his postseason record shows, and all the idiot analysts have already started bloviating about whether he "can win the big games." Of course he can, if the Falcons do as you prescribe.

A defeat like this can help, too. It helped the Saints grow up, take nothing for granted, play harder in tough games.

I'm actually a little amazed the AJC columnists haven't "What If"d the decision to take Peria Jerry instead of Clay Mathews in the draft...