When I Find Myself in Times of Trouble…

There are a precious few subjects that I know well. Michigan football, Dylan songs, Bond movies, and the Eastern Front are pretty much the list. So, with Rich Rodriguez’s tenure at Michigan crumbling like the Wehrmacht in the face of Operation Bagration or Drax’s space station (check check), my mind went into analogy overdrive. I spent an entire workout yesterday like John Cusack’s character in High Fidelity, listening to Dylan break-up songs to find the right one to capture my mood. Because Dylan fans tend to be obsessive and we like to show off our command of his output, I wanted something obscure. Trying and failing at that task, I kept coming back to his most famous (or at least one of the two most famous alongside “Don’t Think Twice, It’s Alright”).*

* – There is a line of thinking that “Tangled up in Blue” is a break-up song, at which point it would be Dylan’s most famous song in the genre. Maybe I’m too much of a glass half-full person, but I come out of listening to that song with a sense of optimism. Look at how it ends:

But me, I’m still on the road
Headin’ for another joint
We always did feel the same
We just saw it from a different point of view
Tangled up in blue

That’s a perfect mantra for Dylan’s life as a traveling performer - a modern-day Hank Williams - after the end of his marriage to Sara. It’s a “my marriage has ended, I'm at peace with the reasons, and I’m moving on with my life” coda. That doesn’t scream break-up to me. Put another way, college Michael didn't cue this song up after a break-up. This song, on the other hand…

It's All Over Now, Baby Blue

You must leave now, take what you need, you think will last
But whatever you wish to keep, you better grab it fast
Yonder stands your orphan with his gun
Crying like a fire in the sun
Look out the saints are comin’ through
And it’s all over now, Baby Blue

The orphan with his gun could be the fans of West Virginia whom Rodriguez left behind, but I doubt that they are crying right now over the fact that Rodriguez fell flat on his face after he left them. Likewise, Rodriguez’s players were generally well-behaved in Ann Arbor with few police blotter issues (unlike Michigan’s friends in East Lansing), so the gun line doesn't work for them either. That’s one of the funny aspects of Rodriguez’s failure in Ann Arbor. When he arrived, the concern expressed (or at least hinted at) in the Detroit-area media was that this was the college coach of Chris Henry and Pac Man Jones. Michigan was going to turn into Miami North, especially because Rodriguez would recruit a bunch of scary kids with dreadlocks from the South. Instead, Michigan’s players made very few headlines off the field, but Rodriguez is getting the boot anyway for the prosaic reason that the product on the field was terrible. Who knew that Michigan was hiring Tyrone Willingham?

The highway is for gamblers, better use your sense
Take what you have gathered from coincidence
The empty-handed painter from your streets
Is drawing crazy patterns on your sheets
This sky, too, is folding under you
And it’s all over now, Baby Blue

I thought of the first line during Michigan’s third quarter capitulation on Saturday. Michigan’s last show of life under Rodriguez came in the form of forcing their first punt of the game on the Bulldogs’ opening drive of the third quarter (read that again) and then Junior Hemingway running the punt back to the Bulldog 23. A Michigan touchdown would close the gap to 24-21 and we would have a game. Three plays netted five yards, at which point Rodriguez sent on the field goal unit, a decision so bad that even conventional wisdom personified Mike Patrick knew that Rodriguez was making a big mistake. Sure enough, Brendan Gibbons missed the kick and Mississippi State scored the final 28 points of the game. Use your sense, Rich.

The second line makes me wonder about Rodriguez as a coach and our ability to evaluate coaches in general. Was Rodriguez’s reputation gathered by coincidence? Was he a product of Pat White and Steve Slaton? I still don’t think that’s the case because then how do you explain his offensive success at Clemson and Tulane? Is he a good offensive coordinator who was lucky to stumble onto Jeff Casteel at West Virginia and then failed to replicate that one good staffing decision in Ann Arbor. Yes, and that’s where the coincidence line hits home. A lot of what we believe about head coaches is really a product of the guys around them. Speaking of which, it’s not hard to think of the empty handed painter drawing crazy patterns in this story: 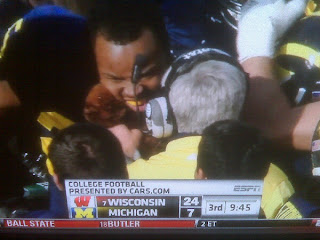 All your seasick sailors, they are rowing home
All your reindeer armies, are all going home
The lover who just walked out your door
Has taken all his blankets from the floor
The carpet, too, is moving under you
And it’s all over now, Baby Blue

The first two lines make me think of Rodriguez’s players in Ann Arbor, many of whom set sail from Florida and other parts of the South to play for a coach with a great reputation and may row home now. On the other hand, part of what was so dispiriting about the loss on Saturday was the fact that the team didn’t fight for Rodriguez. With his job twisting in the wind, I expected Michigan to play their asses off, either to save their coaches’ jobs or as a last hurrah, sorta like what the 2007 Michigan team turned in in Lloyd Carr’s final game. ("Some day, Urban, your team will play as hard for you as mine did for me today." I wonder if Meyer was thinking about that line on Saturday.) Instead, Michigan got a limp, disinterested effort from its reindeer armies. The players appear to have checked out.

As for the lover, the protagonist of the song, that has to be Dave Brandon, who has metaphorically had to sleep on the floor as a result of Michigan’s cash cow football program being in the toilet.

Leave your stepping stones behind, something calls for you
Forget the dead you’ve left, they will not follow you
The vagabond who’s rapping at your door
Is standing in the clothes that you once wore
Strike another match, go start anew
And it’s all over now, Baby Blue

The first two lines have to represent Rodriguez’s hope as he moves forward from the Michigan job, namely that he can leave the last three years behind. Despite the epic failure that was Rodriguez’s tenure in Ann Arbor, the consensus is that he’s not a bad coach. That’s the odd thing here. You would think that a guy who went 15-22 at the helm of the winningest program in college football history (and a program that had played in three Rose Bowls in the five years before Rodriguez was hired, so it wasn't as if all of the Wolverines' glory days were in the distant past) would come out of the process with his reputation in tatters, but I don’t feel that way. A Rich Rodriguez who has learned his lesson about how to hire defensive coaches and whose recruiting makes sense at a new school could produce excellent results. (I certainly would have taken him over Randy Edsall if I were Maryland.) It’s just a matter of striking another match and starting anew.

And as for the vagabond rapping at the door, here comes captain obvious: 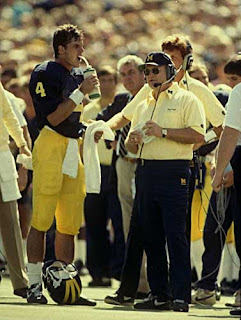 One last thought on Rodriguez’s untergang: I felt nothing on Saturday. I started reading a book midway through the third quarter and then went over to see some friends for the Rose Bowl. The last time I felt any emotion about this Michigan team was the first half of the Wisconsin game. After that point, I just gave up. If I’m representative of the fan base, then that reaction is why Dave Brandon will make a change. It’s one thing for the fan base to be angry. It’s another, more dangerous thing for the fan base to be marked by apathy.

Wow, no wonder you get those Best blog of Atlanta thingies. Great post.

Surprised you aren't discussing the Big Ten's "Big Day" a little more. Wait until after OSU's game against a quality SEC team, perhaps?

I'm biased in some sense, I guess, but you're generous in still thinking that the consensus remains that Rich Rodriguez is still a good coach. What major program would touch him? In terms of Michigan results only, offensively, the guy can gain yards. Defensively, his teams are all time bad, and repeatedly so, after two coordinators. Special teams, they are awful and getting worse. He committed major NCAA violations, according to the only arbiter that matters. And I certainly don't see young talent in place (save for Denard), so I can't say he recruited well. His teams have found a way to lose. They score less points than you'd expecting considering the yards gained. They get worse as the season goes on. They sometimes don't show up in rivalry games and bowl games. There are many excuses that he can make, but in terms of Michigan results, he's an awful head coach, and well, that's a consensus of one, anyway....I love him.

And I'm sure you if you've seen Don't Look Back then you can work into that post the face that Donovan makes after hearing Baby Blue for the first time in that hotel room....

Put me in the "apathy" crowd. For the first time I can remember, I stopped watching a Michigan football game in the 3rd quarter. Your comment about little effort from the players was right on.