A Lion in Winter

I am almost done with Winston's War by Max Hastings* and one of the dominant themes of the book is how irrelevant Great Britain became as the War reached its final stages.  The British deserve great credit when they were the last bulwark against the Germans after the fall of France in 1940.  However, by 1944, they were spent.  They didn’t have the population to take casualties, the industrial base to put thousands of tanks and planes in the field, or the money to pay for expansive military action.  Churchill wanted to occupy the Aegean islands to get Turkey into the war, but the US would not go along, so the British had to send an under-strength force and the campaign turned into a fiasco.  Churchill wanted to commit more forces to Italy and then push on to Vienna, but the Americans wanted to focus on landing in and then pushing through Normandy, so Italy became a sidenote.**  By 1944, the Americans did pretty much whatever they wanted and Churchill’s strategic impulses were rendered irrelevant.  He went from leader of the Western World to bystander.

* – For the record, Hastings and Antony Beevor are my two favorite WWII historians.  I will buy just about anything that they write.  If you are interested in getting into WWII as a subject, then their books are a great starting point.

** – In both instances, Marshall and Eisenhower were correct and Churchill was wrong, so it’s just as well that Great Britain did not have any pull.  That’s the funny thing about the image of Churchill as the great opponent of Stalin.  If Winston would have had his way, then D-Day would have been delayed, the push for the breakout from Normandy would have had less oomph, and the Soviets would have had more time to occupy more of Western Europe.  And that’s before we get to Hastings’ discussion of Yalta, where Churchill didn’t exactly stand up to Uncle Joe as is sometimes portrayed in the popular imagination.

Saturday, around 5:30, the image of a once-great and inspirational leader being shunted off to the side, ignored by those who once listened to everything he said, suddenly popped into my head in a completely different context… 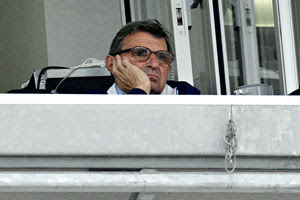 Email ThisBlogThis!Share to TwitterShare to FacebookShare to Pinterest
Labels: College Football, Michael Butchers the Past, What I'm Reading