OK, I frankly don't know where to begin after watching that game.

I had an impulse at first to write a "Chelsea got what they deserved" post based on the fact that the Blues made no attempt to get a road goal, so it is only fitting that they go out of the Champions League on road goals. We don't want to reward teams for parking the bus, blah blah blah. But then, I think about the way that Chelsea lost the Champions League Final last year when they were one kick away from adding the trophy that has eluded them and I just feel sad for their fans. It's hard to deal with one blow like that; following it with an injury time strike to lose a Champions League Final at home goes beyond cruel.

Now that the Special One has left North London, there are few personalities on that Chelsea side that are disagreeable. Ashley Cole is the only one who comes to mind. Didier Drogba is a flopper nonpareil, but I do have a soft spot for African players and he's one of the best. Michael Essien is one of my favorite non-Barca players. If Barca were to be knocked out, then better they lose to a fantastic strike from a great player. Frank Lampard seems like an alright guy. Now that the English have given up claiming that he's the best center back in the world, there's nothing wrong with John Terry. Michael Ballack is a good player who deserves to be more than a bridesmaid someday. I feel bad for this core group that it's looking more and more likely that they won't win a Champions League together.

He just was not very good. He missed a penalty on the Pique handball, although there was a whiff of a foul by Malouda on the header that set up the chance. The remaining Chelsea penalty shouts were all of the marginal variety (in my biased opinion). The decision to send of Eric Abidal was absolutely horrendous and puts paid to Lucky Guus's inference of a conspiracy after the match. I'm willing to cut Chelsea a wide berth in their post-match behavior and comments. They lost one of the all-time gut-wrenching games and they did have some close decisions go against them, so some animated griping is natural. That said, I cannot BELIEVE that this came out of Hiddink's mouth:

People are making suggestions but it's difficult to prove things. Conspiracy is a very tough word and you have to be able to prove it. But when you analyse things closely, then I also start thinking... I cannot say if Uefa would not like another all-English final. What I'm sure about that, in big games like this, you need top notch referees who have lots of experience in the big leagues in Italy, Spain, England and Germany.

Yeah, Guus, as soon as you give back whatever rewards you received for guiding South Korea to the 2002 World Cup semifinals on the backs of a series of atrocious calls by clearly intimidated refs from, wait for it, Ecuador and Egypt, then you'll have the right to make this complaint. I can guarantee you that people in Spain are laughing their asses off at Hiddink, seeing as how La Furia were denied two clear goals in the quarterfinal and lost in penalties. Of all the people in the world to complain about refs from small federations getting stage fright in big games, you are the absolute last person who can do so.

Man of the Match

Victor Valdes? You could make a strong case for it. Who saw that coming? Player ratings on a 1-9 scale:

Valdes - 7.5 - Iniesta's heroics don't matter if not for a huge save on Drogba in the second half. He also did well with Drogba's free kick after the disputed "was he in or outside the box?" call.

Abidal - 6.5 - Played reasonably well and was only guilty of a red card in a strange Norwegian fantasy.

Toure - 6.5 - Not bad for a midfielder playing defense. His speed and height were important, although there were definitely occasions where space appeared in the middle because of positional issues. When I think of Ten Catalan Lions in the future, I'll remember Toure gutting it out late in the game when he was clearly winded from chasing Chelsea players all night.

Alves - 4.5 - I was going to give him a 3 as the game crept into injury time and I was composing the "we lost to a better team" post in my head. He wasted so many good crossing and dead ball chances.

Busquets - 6 - Not his best game, but he was reasonably good at blunting Chelsea attacks.

Xavi - 6.5 - Played his usual sharp-passing game, but he was pushed back by Chelsea's excellent midfield. It was his nice pass out to Alves on the right that started the move for Iniesta's goal.

Keita - 5.5 - He didn't materialize at all like I thought he would, although Alves's horrendous crosses had something to do with that. The lack of service to Eto'o has to be caused, at least in part, by having an inferior passer in one of the two central midfield spots.

Messi - 6 - A quiet game and he could use work on his shooting from outside the box, but don't lose sight of the fact that he assisted on the winner. Like Pirlo in the '06 World Cup semifinal, Messi was awfully composed in a big situation to find a teammate as opposed to trying to shoot himself.

Iniesta - 8 - And not just for the goal. He was the most dangerous of the three front men for the entire match. Barca clearly noticed this at the half because the attacks were all coming from the left in the second half.

Eto'o - 5.5 - whether it was a lack of service or a lack of running, Samuel was totally absent.

My Moment of Prescience 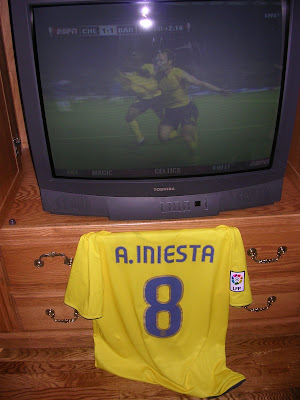 You'll just have to take my word for it that I went with the Iniesta yellow jersey when I came home from work tonight and sat down to watch the DVR copy of the game. I am happy with that decision.
Posted by Michael at 10:46 PM

I could write a novel but I won't.

Eh, I think you still should have gone with the "got what they deserved" post. It's one thing to put 11 behind the ball on the road, it's another to do it in the 10th minute up 1-0 at home. With the quality of the players and coach Chelsea have, there's no excuse for them to go the Greece route.

I thought Pique was the MOTM. Lots of counters broken up and easily Barca's best distributor out of the back. Pure class.

I was also thinking this game had the same feel as the 06 ger-ita semi, all that was misssing was an empty net goal and that great song they played at the end of world cup games that year.

Pep really knows how to celebrate.

Kanu, it's great to hear from you. I'm interested on your thoughts on Arsenal now that it's clear that they cannot compete at their current spending levels. Are they not spending because it's against Arsene's philosophy or do they not have the money?

Jerry, I agree, but after what Chelsea have gone through, piling on seemed a little excessive.

Jacob, the irony of Pep going on his touchline run is that Mourinho did the same thing, culminating in a slide on his knees, after Drogba equalized at the Camp Nou in the '06 group stage game. Within reason, I'll excuse some odd behavior from both teams after the game yesterday because it was so dramatic.

Thanks. Good to be back {moving + planning a wedding in 5 months = the death of free time to cruise the blogs}. Funny, I have been meaning to ask you a similar question: has your attitude towards TH14 changed at all now that he is on your team and given his performance this year? Last year was obviously a throwaway for a moody mercurial type who was going through a bitter divorce and custody battle for his little girl after cheating on his wife & destroying his marriage, but this year Barca has been amazing when combined with SE9 & LM10 {showed even yesterday how they are great but not as OMG amazing when he -or any of the troika- doesn't play}, so I was curious...

Wow, you know how longwinded I am- my thoughts on your question will take a while to get down, and probably shouldn't be done here at my desk at work, but I'll get back to you perhaps in an email.

Chel$ea yesterday compared to Greece? That's harsh, man. Last week was certainly park the bus{3 shots to Barca's 19}, but not yesterday. Chel$ea actually created more good chances, and truth be told should have put the game away {Drogba free kick, close headers, Drogba's terrible shot in 52nd minute when in alone on VV, etc}, whereas AI8's goal was Barca's 1st shot on goal of the match. Shots were even- a classic Greece situation would have been if Chel$ea won the 1st leg 1-0 while playing antifootball and having 3 total shots to Barca's 19. I thought Guus played it tactically perfect, especially after watching what happened to RealMadrid when they tried to match Barca on Sunday punch for punch: they got knocked the fuck out.

The beauty of yesterday's game for me was the Drogba schadenfreude, especially after he labeled the referee a "fucking disgrace" to the worldwide TV audience.

Drogba himself is the disgrace with his incessant diving, cheating, and theatrics. He might have got that penalty call in the 1H, as it was a 50/50, if it wasn't for his reputation as a shameless "boy who cries wolf" diver.

Also, if he had buried that easy 1 on 1 with Valdez in the 52nd minute by simply chipping the already prone Valdez, it would have been game over and Chel$ea would be packing for Rome right now.

Even more hilarious is that all of his acting, rolling around, and antics contributed to the 4 minutes of added time, which allowed Barca to score the goal to send them out in the 93rd minute.

That is an epic trifecta of helping your team lose when they easily could have won. In more ways that one, he has no one to blame but himself. All he has to do is look in the mirror to see who is the fucking disgrace.

Also, I'm pretty sure that all things considered that was the single worst refereed game I have ever seen, considering the sheer number of decisions that the ref got wrong. It was stunning, and certainly the blunders were spread around damn near evenly, so STFU Chel$ea. Give that ref a gold statur of Graham Poll, pronto.

I'm curious to hear how they can explain how a ref who is conspiring to keep Chel$ea out of the final would reduce Barcelona to 10 men with 30 minutes to go when Barca is already 1-0 down. Take your time, Chel$ea, and get back to me whenever you like.

So excited to have a final worth watching instead of the ultimate meteor game in the CL final 2 years running.

Yes, I'll be the last person in the world to upgrade to the flatscreen.