Five Thoughts on the Champions League 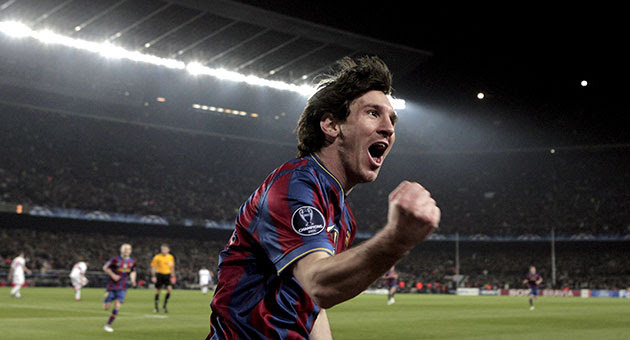 1. Barca figured something out at halftime of the match against Valencia on Sunday: Thierry Henry can still be a useful player. It's hard to say that a team that has lost one game out of 26 in La Liga (and that with a youth team player at right back) and qualified at the top of its group in the Champions League is struggling, but if there has been a cause for concern for the Blaugrana this year, it's been their struggles in replacing Samuel Eto'o. Zlatan Ibrahimovic started reasonably well, but he's ground to a halt over the past several months and the team looks less fluid when he plays. (There's a parallel to be made between Ibra and Allen Iverson. Both are tremendous individual players who are capable of incredible acts of skill. However, both also need the ball all the time, so they struggle to play a team game where the ball is supposed to circulate.) Thierry Henry has been mostly bad. Sunday, Barca went to the locker room at halftime somewhat fortunate to be 0-0 against Valencia. Pep Guardiola threw Henry onto the pitch at center forward and the team played one of its best halves of the season, thrashing Los Che 3-0. Henry didn't score, but he created space for Leo Messi to hit a second half hat trick. Henry's movement, passing, and presence made the space for Messi to run riot. The game illustrated Tim Vickery's point that players are a function of their surroundings and that Messi has the perfect surroundings at Barca, but he has no help for Argentina.

That dynamic continued yesterday. Messi was absolutely sublime. He scored two, he could have scored several more, and he set up a goal with a great pass to Yaya Toure. Again, Henry didn't score, but his understanding of how to play the center forward position was critical. It will be interesting to see how Guardiola plays his hand going forward. Is Ibra now out of the first choice XI? And given that Henry is getting up there in years, how much does he need to be rested now that there will be a temptation to play him every week?

2. Am I going to have to revise my negative view of Jose Mourinho? I started to dislike him in 2005 when he brought an expensively assembled Chelsea side to the Nou Camp and promptly parked the bus, then had the nerve to allege that Frank Rijkaard had gone into the referee's locker room at halftime to alter the result. Mourinho then followed that performance by taking part in the "shit on a stick" ties with Liverpool in 2005 and 2007. So you might imagine my surprise when Mourinho's Inter arrived at Stamford Bridge defending a 2-1 first leg lead and then deployed three strikers and an attacking midfielder. (Technically, Goran Pandev might be more of an attacking midfielder than a forward, but the point remains.) Rather than committing resources to defense, Inter took control of the game and were dominant by the second half, with their winning goal coming from a mile away. I at least need to change my view of Mourinho as a dogmatic conservative. In reality, he's an extremely detailed preparer of teams who analyzes the opponent and comes up with a specific approach. In this case, he saw the weakness of the slumping Chelsea back line and went for the throat.

Also, Mourinho deserves credit for remodeling the team. It would have been tempting to make few changes to a side that won four straight Scudettos (albeit two aided by Calciopoly). Instead, he bought five players in the summer - Eto'o, Lucio, Thiago Motta, Wesley Sneijder, and Diego Milito - and then added Pandev in the winter. All six started on Tuesday. Jose has turned the team over in the space of a year and they look like a more effective force. Specifically, they finally have the player (Sneijder) who can link defense and attack. (As a Dutch fan, I have to say that watching Sneijder and Robben drag their teams forward in Europe is an encouraging sight.)

3. On a related note, is it possible that Manchester United is better without Cristiano Ronaldo in the same way that Inter are better without Ibra? United lost the former World Player of the Year, but the side that they have now fits together a little better. Everyone has their role, namely Rooney scoring goals and everyone else on the team supplying him. They're like a Christmas tree with Rooney as the star on the top. On the other hand, United's back line isn't nearly what it's been for the past two years. Rio Ferdinand's health is questionable and Nemanja Vidic has had a noticeable drop in form. I'd be very interested to see them play Inter again to measure how United would defend the suddenly potent Nerazzurri.

4. I was definitely underwhelmed by the supposedly new and improved Bayern. Bayern have been torrid in the Bundesliga for months, but in their two matches against Serie A also-ran Fiorentina, they were outplayed for long stretches (and saved by some really shaky refereeing in the first leg by B&B favorite Tom Henning Ovrebo). I could just hear Der Kaiser grumbling away (in a language I don't speak), especially about the defense that could not handle Stevan Jovetic in either game. Daniel van Buyten was especially weak. Going forward, Louis van Gaal's strategy will have to be to put opponents under so much pressure with Robben, Ribery, and Gomez that the defenders have little to do.

5. My ranking of the remaining eight contenders headed into the quarterfinals:

Email ThisBlogThis!Share to TwitterShare to FacebookShare to Pinterest
Labels: Barca, Hating on Germans, The Other Football

I've never understood why teams try to force square pegs into round holes. Henry on the left looks lost, he's always been a center forward hasn't he? He certainly has looked very comfortable there the last 2 matches and it lets Messi run roughshod on the right.

I've not been able to watch much soccer lately and am by no means an expert, so help me understand why anyone lets Messi dribble to the middle and fire missile after missile with his left foot. Wouldn't defenders be told to force him towards the corner and make him shoot with his right or cross it to a (relatively speaking) less dangerous striker?...and this is where I display my soccer ignorance.

Henry was a center forward for Arsenal, but he often drifted out to the left and then cut in, so the left forward role isn't a major stretch for him. He was terrific in the role last year, as he had epic performances in a number of games (home win over Valencia, road win over Real, and second leg against Lyon).

Regarding Messi, the Stuttgart defenders were terrified of him yesterday and backed off too far on the first goal. Messi's shot from distance has improved, which makes the backing off strategy difficult. In terms of defending him, if you play too far to the center, then he is good at cutting towards the near post and getting into a shooting position from there. That's what he did for the first goal on Sunday:

In terms of defending him, I go back to what Chelsea did last year. They made sure to have two guys on him (the left back and a midfielder) at all times, one taking him inside and one taking him outside. Chelsea's defensive teamwork over the two ties was very impressive. Also, they played their right back, Jose Bosingwa, on the left so that when Messi cut inside, he would be moving onto Bosingwa's stronger foot.

And that's why I read your stuff. now, if you want to talk how to beat a Cover 4 I could stay with you, but as much as I love soccer I have no concept of strategy.

Grits - Jose's decision to go with three up front was more of a defensive strategy than you realize (or, I guess, give him credit for). He wasn't 'going for the throat' rather, he knows that with Chelsea's midfield diamond the width HAS to come from the full backs. With three up front, including a cf that runs all over, he can force the two wing full backs to stay deep to cover. Eto's running in the middle, regardless of how shocking his touch was, also kept both center backs occupied because he made runs from all over. Without their normal width provided by the marauding full backs, Chelsea were forced to play the ball through the middle. That then makes it much easier to clog everything up the middle of the pitch, something that both Motta and Cambiasso are stellar at. For further proof, look at how many blocks, steals, etc, the Inter fullbacks made from positions within the edges of the penalty box. Chelsea had no threats wide which allowed all four inter defenders to cover for each other in the middle.

Note, this tactic only works if you have a player in the middle that can turn on a dime and drop balls behind the defenders repeatedly. Which Inter obviously has in Wesley.