Iowa Got Lucky, but it was an Accident

It is easier for a camel to pass through the eye of a needle than it is for a fan to admit that his team was lucky. I give you Iowa. Team Speed Kills flags Iowa as potentially overrated for the obvious reasons that they almost lost to a series of bad-to-mediocre teams in 2009. MGoBlog co-signs. As could be expected, Black Heart Gold Pants gets prickly and refuses to acknowledge the obvious. You know your argument sucks when you're fighting the notion that your team was lucky in 2009 and you cite a chart that shows your team to have been the second luckiest team in the conference. 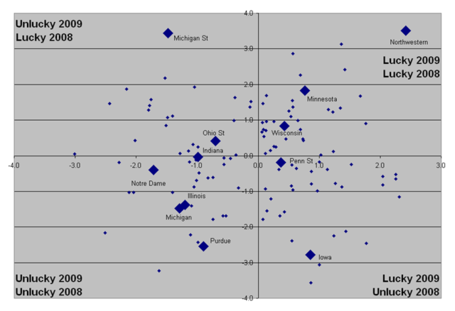 For their next trick, BHGP will show a picture of Sofia Vergara to prove that Columbians are ugly.

Iowa finished tenth in the Big Ten in total offense, ninth in yards per play, tenth in scoring offense, tenth in rushing yards per game, ninth in yards per carry, sixth in passing yards per game, and tenth in passer rating. In short, their offense sucked. Iowa won 11 games because it had a great defense and it won a disproportionate share of close games. Maybe Hawkeye fans think that their team has some sort of magical, replicable skill at winning tight contests. If so, they might want to consider talking to a Notre Dame fan about the 2003 Irish.

As a result of Iowa's inability to demonstrate its superiority over Arkansas State and Northern Iowa, every ranking system that accounts for data beyond record and strength of schedule pegged Iowa in the lower part of the top 20. The Sagarin Predictor had Iowa 17th. Sports Reference's SRS measure had Iowa 19th, as did Football Outsiders. In short, you can accept what reams of research tells us about football, which is that points, yards, and drive outcomes are a better indication of a team's merit and contain less noise than the final record itself. Or, you can reject all of that, put on a dumb hat, and wait to be punked by Fire Joe Morgan.

Iowa played a bevy of close games in 2009 because it had a very good defense and a bad offense. Thus, every game became a defensive battle, although some of the games ended up with higher scores because of Stanziballs run back for touchdowns by Iowa's opponents. Regardless of whether they were playing Ohio State on ther road or Northern Iowa at home, Iowa's defense kept them in the game, but their offense prevented them from getting a substantial lead. Because 2009 performances provide the baseline for 2010 predictions, it makes sense to evaluate Iowa in 2010 by acknowledging that they were a 9-4 team that got enough breaks and made enough timely plays to go 11-2. (The reverse was true in 2008, when Iowa was better than their record.) Maybe Iowa will be better in 2010 because of returning starters, Stanzi learning to throw to the right team, etc., but now we're venturing into the unknown. What is known is that Iowa was not a top ten team in 2009.
Posted by Michael at 7:52 AM

I can take being called lucky, but that doesn't take into account Ferentz's game management. The offense wasn't a world beater, but Iowa never runs the score up that much- - it's more of an NFL gameplan (get up by 7-14 and coast to the finish) which allows the other team to hang around. You also don't take into account that Iowa rarely had an offense that was full-strength due to injuries ALL YEAR LONG.
Besides, that bad offense pretty much had their way with Georgia Tech in the Orange Bowl. Yeah, GT had a terrible defense, but I didn't think it was that bad.

I can see the point that some defensive teams get a lead and then shut up shop to avoid turnovers, but that's not how Iowa played last year. For one thing, they didn't avoid turnovers. For another, they were typically very close to their opponents. Take the MSU game for example. It wasn't that Iowa got a lead and sat on it. Rather, they were in a tight game for four quarters and couldn't move the ball on one of the worst defenses in the conference until the end when they desperately needed to score.

As for the Orange Bowl, you took the words right out of my keyboard. Georgia Tech had a terrible defense last year. Like Iowa, they were not as good as their record. The Iowa offense against the Tech defense was a real "movable object against resistable force" confrontation. What was interesting about that game was the Iowa defense against the Tech offense and Iowa won that battle.

Wait, I thought we were saying they were lucky...

Of the three you mention, only Football Outsiders has GT below Iowa. That must sting for them.

And yes, the GT defense was that bad. So much so, that they went through three different alignments throughout the year trying to fix things and still couldn't do it, leading to Wommack getting fired and Al Groh getting hired along with his 3-4. Gt was lucky to walk away with 11 wins considering how miserable the defense was. And Iowa got lucky with one GT TD getting called back because of a holding call. That game was close to having a different outcome.

Normally I like to bang heads with Michael about GT, but these things just do not lie. GT was lucky last year because of a crappy D and they will likely be lucky again this year because of losing the four best players to the draft.