Well, That Was Interesting 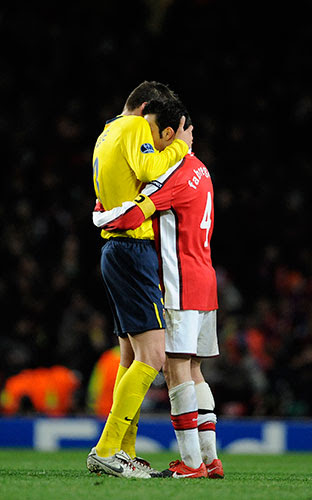 You would have a hard time finding a match in which the scoreline flattered a team more than 2-2 flattered Arsenal yesterday. Here is the Guardian's description of the match at the end of the first half:

HALF TIME: There's no point me telling you the score, you simply wouldn't believe it. How on earth aren't Barcelona ahead? They could easily have been five up after a quarter of an hour. Oh for a goalscorer in the mould of, I dunno, Samuel Eto'o. For Arsenal, it's been pretty dismal viewing, although Almunia and Nasri have both been excellent. And for a team often accused of lacking bottle, you can't accuse them of not digging in and putting in a shift.

And here's the description at full-time:

FULL TIME: There's no point me telling you the score, you simply wouldn't believe it. Well, how on earth have Arsenal got away with a draw there? They were thoroughly outplayed for approximately 88 of those minutes - and allowed Zlatigol to break his duck against English clubs - but showed immense grit to fight back for a draw. Chances are that Arsenal will need to win in the Nou Camp - but Barcelona will have something to worry about now, especially as Carles Puyol and Gerard Pique will both miss the second leg.

And here is a pithy description at Zonal Marking:

Credit to Wenger for rescuing the situation, but on another day Barcelona would have won the tie by half-time. Arsenal need to learn their lessons from this game if they are to progress: they need to defend from the front as a unit, they need to hold a higher defensive line, and they must field one more defensive-minded player. If they play like they did today at the Nou Camp, they will suffer the demolition job they were fortunate to avoid tonight.

In short, Arsenal confirmed my perception of them: a reasonably attractive side who try to do the same things that Barca does, but do not do them as well. The first 20 minutes were amusing and gratifying for me because Arsenal tried to play football with the Blaugrana, only they struggled to do so because they couldn't get a sniff of the ball. Even after the Gunners came into the game a little, at halftime, Barca had 70% possession and 15 shots to Arsenal's two. It was only charitable finishing and superlative goalkeeping that kept the tie from being over in the first 45 minutes. And on that point, here are two reasons why last night's result was a colossal fluke:

1. Arsenal's two men of the match were Manuel Almunia and Theo Walcott, who also happen to be the two players most criticized by Arsenal fans this year, Almunia for hit not-infrequent howlers and Walcott for being a track guy who doesn't know what to do with the ball.

All in all, I'm very confident going into the second leg. Barca were by far the better team at the Emirates. They didn't emerge with a win because of a stirring fightback put on by the Gunners with the crowd roaring them on. Great, Arsenal has a fast guy on the right wing. Duly noted. Barca will have its starting left back ready to go for the second leg. The only factor that gives me pause is the notion of Rafa Marquez starting against an opponent not named Xerez. Otherwise, drawing 2-2 in the first leg in London is no different than drawing 1-1 at Lyon (Barca won the return leg 5-2) or Stuttgart (Barca won the return leg 4-0). Last night's game only felt like a loss because I finished watching it and said to myself "that should have been 2-5, not 2-2." Taking a step back, 2-2 is a great result for a first leg on the road.

One final thought on Ibra: at halftime, I wanted to straight swap him for Brian Ching. By the end of the game, I wanted him to start every Barca game for the next decade. Ibra had been slumping since December, culminating in an embarrassing performance at Zaragoza. However, he started to come out of his funk with winning goals against Osasuna and Mallorca. Those goals were right place, right time tap-ins, but he then he tried this move against Mallorca:

Moreso than most, Ibra's value as a striker waxes and wanes based on his confidence. Ignoring the three goals that he scored in the last three La Liga matches, that pass showed a player whose confidence had returned. If he is on song, then Barca are close to unbeatable.
Posted by Michael at 8:03 AM

Email ThisBlogThis!Share to TwitterShare to FacebookShare to Pinterest
Labels: Barca, The Other Football

Puyol and Pique missing along with Arshavin & Fabregas for the Arsenal. This is looking like a war of attrition. Arsenal was extremely lucky. That was a soft penalty, but the referee IMO made questionable calls on both clubs. Arsenal at least salvaged some pride at home. But Barca on balance are just awesome. I won't rule out a thrashing by Barca at the NC, but last night's results shows that anything is possible in football.

The first 15 minutes really must be seen to be believed.

Arsenal escaping those 1st 15 minutes 0-0 was the soccer equivalent of the 'kahuna burger' scene in Pulp Fiction when dude unloads on Jules & Vince at point blank range and somehow they are not hit by any bullets, and they (like us now) are left in utter disbelief to explain how that could have possibly happened.

Co-signed on all points, and I'm an Arsenal fan. 1-4 or 2-5 would have been a fairer reflection, and it's hard not to see Barca winning somewhere in the neighborhood of 3-1 on Tuesday, and that's not even considering that Abidal and Iniesta will both likely be back.

Anything can happen, and did last night, but it's hard to see such lightning striking twice in a row.

Is there any other sport where a team can dominate so thoroughly and yet end with a less-than-desirable result?

As a Seahawks fan, I would say Superbowl LV but even with my blue-lensed glasses on the damage in that game was self-inflicted.

Also, Wenger double F**ked me playing Fabregas..now the chances for La Furia to win the World Cup take a bit of a hit.

No Fabregas for Arsenal and Iniesta back for Barca = blaugrana domination of the ball no? Hopefully Marquez doesn't come into play too much, hate that guy.