I Can't Believe That I'm Going To Say This...

But I'm starting to think that Lane Kiffin is not going to be an unmitigated disaster at Tennessee. When Kiffin was hired and promptly started writing verbal checks that his understaffed team can't cash, I put the over/under on his tenure in Knoxville at three years. After thinking about matters, I've softened on that opinion. Kiffin may be a boob, but he's a boob who can recruit. Given that I've often claimed that recruiting is often an underrated function for a college football coach (coaches get criticized for winning with a lot of talent, as if that talent magically appeared at their doorsteps with a note saying "play me at linebacker"), it would be hard for me to write off Kiffin's work in that department. One of the criticisms of Phil Fulmer in the later part of his tenure was that he was not doing as good a job at bringing in top classes. (Fulmer's last three full classes, per Rivals, were 35th, 3rd, and 23rd.) Kiffin has remedied that problem.

Kiffin also appears to be a boob who can assemble a bunch of non-boobs on his coaching staff, another underrated aspect of coaching. I have a lengthy post brewing that divides head coaches into categories depending on whether they have found the right coordinators to handle the head coach's weak side of the ball, i.e. an offensive-minded head coach hiring the right defensive coordinator. Mark Richt has struggled since losing Brian VanGorder. Pete Carroll has struggled (relatively speaking) since losing Norm Chow. Les Miles was a national championship coach when he had Bo Pelini, then he was an idiot when he lost Pelini and replaced him with the scraps on the staff. I'm no fan of Lane Kiffin's offensive acumen, but Tennessee can be very good with a talented roster, Ed Orgeron coaching the defensive line, and Monte Kiffin supplying the brain power. There are certainly models for offensive-oriented head coaches succeeding on the basis of recruiting well and having smart coaches on defense make up for offensive shortcomings: 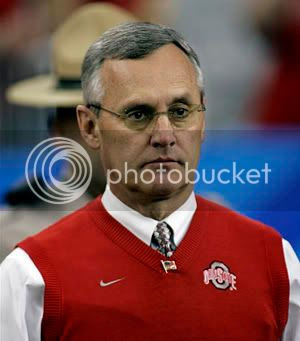 Anyway, it was a little reassuring to know that I'm not the only one having a bit of a re-think about Kiffin. If Kiffin continues to recruit well, then he does pose a threat for Georgia, especially with the program looking a tad wobbly right now. Here is Mark Bradley on the subject:

There’s room for two giants in the SEC East — Fulmer and Spurrier co-existed in the Top 10 for years — but not three. And Kiffin has staked his entire stewardship on recruiting, and there are only so many places he can go. Many of the finest Vols have come from other Southern states: Peyton Manning from Louisiana, Stanley Morgan from South Carolina, Condredge Holloway from Alabama, and now Eric Berry from Fairburn, Ga.

Berry leaving for Tennessee in 2007 didn’t mark the beginning of a Grant-Coleman-Lewis exodus. There were mitigating circumstances: Berry’s dad played at Tennessee. But Kiffin and henchman Ed Orgeron have served notice: They’re going to recruit anywhere and everywhere, and with Florida and Alabama and LSU among the nation’s elite and Auburn apparently on the rise, the SEC brand name that seems most vulnerable is, sorry to say, Georgia.

The Bulldogs should win Saturday. But the battle with the Big Orange is just beginning anew.

The good news for Georgia fans is two-fold. First, Mark Richt doesn't lack in recruiting ability, so it's not as if Kiffin will be able to waltz in and pluck players from the Dawgs. Second, a threat from up north (not to mention from the Flats) ought to be the right spur for Richt to make a change or two with his own coaching staff.
Posted by Michael at 8:26 AM

Fulmer's last classes were not very highly ranked, but neither were his last teams.

I don't think Kiffin can keep up the recruiting numbers for more than two or three years of failure on the field, which is what I think awaits him.

Next year TN goes into battle with a freshman QB, no Eric Berry, no Gerald Jones, and no Hardesty. So I'd say 2011 is the next time they have a chance to be good.

I don't think Bradley's article is actually that interesting. I think his point is essentially that there can't be three top ten teams in the SEC East every year. That's true, but it's also obvious and lacks insight. I'm not sure even he buys his own thesis: there are so many parenthetical asides and backtracks in that column it's rendered nearly meaningless.

TN won the SEC East in 2007, UGA finished #2 in the country, and Florida went 9-3 before the Michigan bowl game. It's not a given that two teams have to dominate for long periods of time. There can be sharing. And I expect there will be next year, when all three teams have new quarterbacks, and Florida loses a lot of its defense.

Ron Zook could recruit well too. How did that work out for him?

Remind me, did Zook have a Super Bowl-winning defensive coordinator? Thanks for reading half of the post and ignoring the other half.

We'll see if Kiffin can sustain his recruiting. He commits so much energy to it and he hired a staff of good recruiting position coaches. That might work.

I'm more inclined to agree with Anon. The games with Georgia and South Carolina are crucial for Tennessee. If they go 0-2 with at least one double digit loss, opposing coaches will be able to paint Kiffin as hopelessly overmatched.

Take it from a South Carolina fan, those arguments are tough to overcome with some recruits, and most parents and advisers. Carlos Dunlap is the most glaring recent example of the many superstar recruits that leaned to the Gamecocks throughout HS, but ultimately end up at a more established program because people close to the kids think they will experience more success and garner more national attention for the leap to the NFL.

Tennessee has the worst non-Vandy offense in the East by far, and they lose a lot more seniors than Florida, Georgia, and Carolina. Whatever the finish this season, next year's team should be even worse. If they go 5-7 in each of the first two years, no amount of smooth talk in the world will be able to consistently pry recruits from winning rivals.

If anything, I would simply say to give him another year before claiming that he has remedied anything at TN. Next year we should see more of his results than this year.

Wow, it might be time to rethink this uga team.